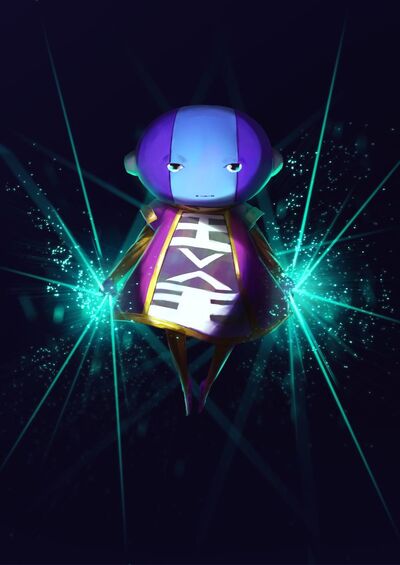 Zen'ō (全王, literally King of Kings) is the king of all of the twelve universes in the Dragon Ball Multiverse. There used to be 18, but he destroyed 6 of them when he was in a bad mood.¨

Special Abilities: Superhuman Physical Characteristics, Enhanced Senses, Energy Projection, Flight, Afterimage Creation, Chi Manipulation, Spatial Manipulation (His hands materialized in the universe to flick planets against each other), Void Manipulation (Can erase people, objects and entire universes by raising his hand), Cannot be sensed by beings lesser than a "God", Creation (Created a button out of nowhere), Possibly Portal Creation (Any character equal to or stronger than Buu Saga top tiers can perform the Vice Shout with sheer power), Immortality (Type 1)

Destructive Ability: Universe Level+ (As The Supreme Being of Dragon Ball, is vastly superior to Grand Priest. Completely erased Merged Zamasu from existence, who was becoming The Universe itself and overwriting it's "Law & Order". Destroyed the entire Timeline and is capable of erasing 18 Universes.)

Speed: Massively FTL+ (Given his status as the most powerful character in the series, he should be no slower than Beerus, Champa, Whis, Vados, or Grand Priest, who are all terrified of instigating his wrath and powerless to stop it.)

Striking Ability: Universe Level+ (Can easily erase an entire Universe and even in the past erased 18 of them out of sheer anger. Superior to both Merged Zamasu and Grand Priest)

Durability: Universe Level+ (Survived the destruction of the entire universe and perceived Zamasu as more of an annoyance than a threat.)

Retrieved from "https://omniversal-battlefield.fandom.com/wiki/Zeno-Sama?oldid=48879"
Community content is available under CC-BY-SA unless otherwise noted.