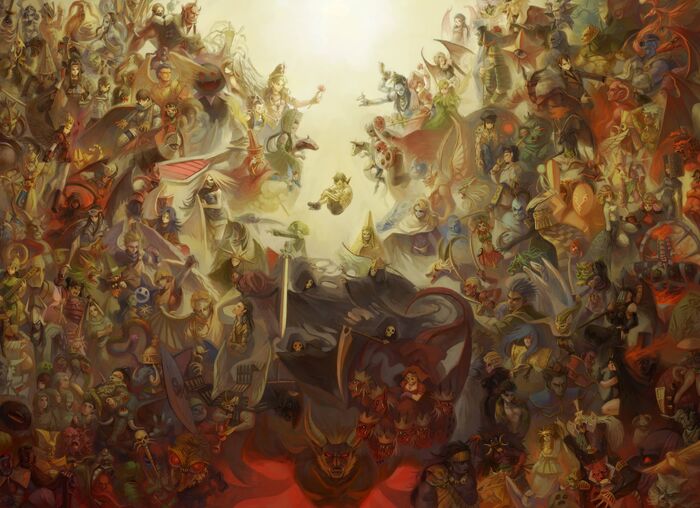 Hello there people, so this blog was WAY overdue and honestly, part of the reason this come out so late, was becuase I lazy and such a blog would take quite some time. That being said, this blog is mainly detailing the many things that make up Shin Megami Tensei's cosmology, ranging from it's expansive multiverse, to even complex structures such as The Amala Network or YHVH's Realm. Suffice to say, this blog is going to be a bit lengthy and honestly, I do apologize for that in advance. Regardless, I want to get into this as quickly as possible, as this is going to be a long ride...So yeah, let's do this

There's also something we learn from Devil Survivor (well upon many things), but when people refer to the "Human World", they referr to The Multiverse and this is better examplified when Amane is talking about the barrier that seperatesThe Expanse and The Human World (aka the entire multiverse). I bring this up because I've seen some people who claimed "THE HUMAN WORLD MEANS PLANET 121U12131138". This is just blatantly wrong, so I thought to cover that as well

This construct has appeared in Shin Megami Tensei III and hasn't appeared since. In SMT III, we learn that The Amala Network is a seperate world that is sustained by Kagustuchi. It's explained that the structure is an infinite construct, where millions or billions of universes are destroyed and rebirthed in an endless cycle of conceptions (all of which are in a blink of an eye). However, what makes The Amala Network a truly interesting construct is it follows the concept of Sangai, which is a Buddhist concept that represents the three aspects of time - past, present and future, which means that each Universe that resides in Amala possesses infinite different iterations.

What this all amounts to is, that The Amala Network is a multiverse that contains 3 different infinite multiverses. This is gathered from the fact that each period of past, present and future are basically seperated and independent of one another. So each universe has infinite variations of past, present and future. What this means is, that The Amala Network is an infinite multiverse that contains 3 infinite multiverses within itself (Which is essentially 3x Infinite x Infinite) and this is impressive when you consider there are characters who can bust this, such as Kagutsuchi (whom of which sustains this with just his mere existence and collapsed it upon death) and Metatron (who's mere voice was described as being comparable to The Amala Network). This would make SMT 2-As immensely above baseline as well and we are just getting started

This is a location that only appears in Shin Megami Tensei: Strange Journey. It's basically the main setting for the game and we learn many things about it through both Zelenin and Arthur. What we know is that The Schwarzwelt consists of various layers laid on top of one another. Each one of these different layers are akin to their own space-time continuums and this is also suggested by the fact inter-dimensional technology is needed to even traverse them. Another thing to note is that demons such as Morax are capable of creating these different layers and close them off through quantum tunneling. It's also again proven these layers are universes as one needs to shift planes of reality to reach another one and this again suggests they are full on universes 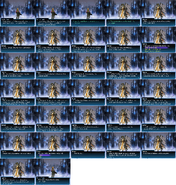 This isn't particularly related to the cosmology, however, it's another instance of demons showcasing their power. In Strange Journey, Demiurge was able to swat away Metatron akin to a fly. Now, I must remind you that Metatron is the same entity who's voice rivaled The Amala Network. The idea that Demiurge can swat him away in the same way a human would do a fly shows just how vast the difference in power some demons can hold between one another (including YHVH's own aspects)

This is the part that I'm sure many of you came to expect here. That being said, The Expanse, also known as The Demon Realm is the natural home of all demons. We learn through Stephen that it stands beyond the multiversal space-time and generally that there is no time present there. I would like to point out that this is supported by demons such as Lucifer, who doesn't perceive Time in a linear manner and defines beings on his caliber as being existing across all of space and time (killing them in any time period has consequence to their future selves).

If you want more evidence for this, we have demons such as Sanat, who exist as a higher dimension entity. Another thing to note is that The Expanse is a purely conceptual realm, with everything being formed as a result of the collective thoughts of humanity, with Stephen even calling The White "aggregrates of thought". This is also supported by the notion that all demons are practially conceptual in nature. SMT Apocalyse goes into great detail about Gods and Demons originally existed as phenomena of nature and their existence being indifferent from what they represent. Another thing interesting is we learn that Binah, the Sea of Harvest, is where demons are born, which is a section of The Expanse

So in essence The Expanse is conceptual realm generated by the thoughts of humanity and in it's nature, it transcends all of space and time (across past, present and future). In truth, the realm would be 5th Dimensional in nature, as it's transcendental of a infinite multiverse. HOWEVER, this obviously doesn't make fodder demon 5-D, just existing in a realm or even having it as your home doesn't make you that level unless feats back it up. So only the Top-Tier demons scale to this (Such as Kuzuryu, who was going to destroy The Expanse and all of existence)

Shin Megami Tensei is no stranger to higher dimensions. Hell, that has surprisingly always been a blatant theme in the games and only more elaborate in the later games. Although one interesting thing is in Shin Megami Tensei: Avatar Turner, there's a realm that is explictly stated to transcend the concept of dimensions. In the same context, you can see it's talking about geometrical dimensions and not universes

So right here, we have evidence that Shin Megami Tensei DOES INDEED have a 1-A cosmology and this of course scales to the god-tiers of the verse. Mainly YHVH, who's realm is completely transcendent and unreachable by anything else in existence. Which would include this space (and logically speaking, a realm above YHVH doesn't make sense considering he is everything in creation as a concept and is one with it. It's even as stated that destroying YHVH would be destroying the world itself)

On that same note, YHVH's realm is his personal space, which is "More infinite and more vague" than everything before it and this alone would put it at 1-A considering the verse does have an infinite dimensional space. However, we can even take this a step further and put YHVH above baseline 1-A. His realm is has 4 Brane-Layers, each with a dimensional-like transcendence to one another and YHVH's throne room is even beyond that called Non-Euclidean Space

So what this means is, that YHVH's realm is essentially 4 to 5 infinities above baseline 1-A and those who scale to it are also 4-5 times infinite above baseline

Shin Megami Tensei's cosmology is insanely huge. There are so many things I could cover here and really, I trully didn't cover ABSOLUTELY everything there is to cover in the series, as it's genuinely just that big. However, I did get over the main things that people look at when they talk about SMT's cosmology. I could add on to this if people want more things, however, I think I did more than enough when it came to this topic and honestly, anything beyond what I mentioned here is probably minor anyways