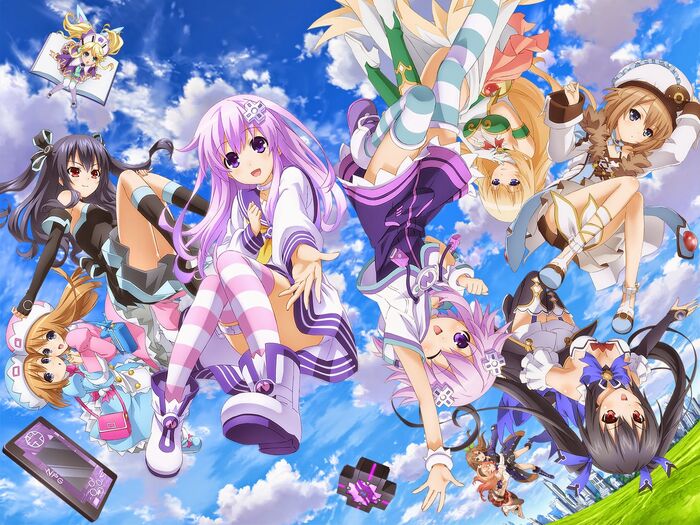 Hello guys, It's Neo and I'm here with another blog...This one is different, as it's going to be a general overview of a verse I feel doesn't get the props it deserves in the realms of fictional debating. That's right, this is Hyperdimension Neptunia and truth be told, not too many sites include all that could be featured regarding this series, as contrary to what people think, Neptunia as a series is relatively powerful. I have several topics I would like to touch on within the blog, this ranges from a general overview of the cosmology to even down to the CPUs themselves and the abilities they have. In essence, this blog may or may not be pretty lengthy considering the type of series Neptunia is (that being a multimedia series that has spanned for years as it stands now). Anyways, I shouldn't shall any further, otherwise we'll be here forever

For those who play Hyperdimension Neptunia, it's no surprise that this series is a multiverse. The concept of alternate dimensions have been in play as a plot point ever since Hyperdimension Neptunia Victory, where Neptune was able to reach another dimension seperate from the one she normally lives in. So yeah, the idea of a multiverse was always a thing in Neptunia and even a major point in the games, however, we never knew how expansive it was until much later in the series with other games. In Super Neptunia RPG, we get a direct confirmation that The Hyperdimension Neptunia multiverse is infinite in size, as it directly states "In one of infinite dimensions, the world of Gamindustri exists...", which also confirms that Gamindustri is also a universe...Don't worry, we'll touch on that much later, but yeah, suffice to say, Neptunia has a multiverse and it's 2-A in sized

You'd think we are done here, but no, there's other things left to cover in this part as well. In Superdimension Neptune vs Sega Hard Girls, we learn several things about the nature of Neptunia's multiverse and all are pretty interesting. As explained by Histoire, time isn't as linear as we thought and things are a bit more complicated. According to her, past, present and future exists as eras, meaning they are not directly connected and are akin to their own alternate universe, meaning a single dimension in Neptunia contains alternate pasts, presents and futures. What further proves this notion is a multitude of statements in the same game, such as the fact an era was called a timeline by Neptune and also the fact it's alluded to that in a dimension ,many different histories exist as alternate universes

So you you may be wondering, what does this mean...Well in Neptunia, past, present and future isn't connected within a universe. In essence, they exist as their own era and these eras exist as alternate timelines that all are part a ONE universe. So yeah, characters who can effect an entire universe are way above Low 2-C and would likely be 2-A considering history is infinite and this is further proven by the fact there are infinite locations with logically infinite time such as The Gamindustri Graveyard, which has infinite locations

Now, this leaves us with Heart Dimension, which would also be a 2-A construct considering it should have the same properties as a regular dimension, which in itself has infinite universes. I would also like to point it, it was already naturally 2-A considering the dreams of infinite eras are made into dimensions, which is a thing that is none to happen to Heart Dimension + This at least effects Zero Dimension, as Adult Nep was effected by the delusion powers

An important character that kinda ties the scaling together is Histoire and while Arfoire isn't as important to the scaling chain as Histoire, she is still worth going over. So, one overlooked thing that people didn't seem to understand was that Histoire is abstract. Lemme explain, as early as the original Hyperdimension Neptunia, Histoire was consistently stated as being "the world's everything" and it's implied that all of existence is simply part of her. To further cement this point, Histoire also even states that one can't change the world without her consent and that changing her would change the world and vice verse. So yeah, Histoire is meant to be the very world itself and embodies it as part of her essence. Going by Vs Battle Wiki she'd be a Type 1 Abstract considering she doesn't need a physical form

Some are quick to say that Histoire only represents the planet or even just the universe, but no...There's actually evidence to suggest she embodies the multiverse and this is proven with Croire (who is similar in nature to Histoire), who is proven to exist in numerous realities and to have seen them grow and die at once. Now, some are also quick to say "B-But Croire states he can hop dimensions, so clearly he doesn't exist across them" and that's a valid point until you realize Histoire has a similar nature to Arfoire (Here's where she comes in). Contrary to what people believe, Arfoire isn't a physical force, she's akin to a conceptual being that manifests herself through avatars and her true form is naught but The Deity of Sin. This applies to Histoire, as in the original Hyperdimension Neptunia, it's revealed her nature is similar to Arfoire and as such, we can logically conclude all Histoire's we see in other worlds are manifestations of the one true being, who is the world itself

Contrary to what people think, Hyperdimension Neptunia definitely isn't haxless and there are a multitude of abilities that the CPUs have across many different games and media. That being said, this section will go over the abilities that apply to basically every CPU, considering these are general abilities and not exclusive to just one CPU

To the surprise of nobody, there have been a fair share of people attempting to refute the many things that makes Neptunia as a whole pretty powerful. Well, since I'm here, I might as well refute some of these misconceptions, especially since some of more widespread than others. Anyways, let's finish on this note

Let's get the major one out the way...I've seen many people state that dimensions aren't universes in Neptunia and no offense, but I fail to see how that's even a legit argument. Ignoring the manga just outright calling dimensions parallel universes, the whole plot points of Hyperdimension Neptunia Victory and Megadimension were that dimensions were akin to parallel worlds. What's even more damning about the notion that dimensions are indeed universes, we consistent see dimensions have stars, many times in fact. So in conclusion, dimensions not being universes feels off considering the plot of at least two games and contrary showcasings of that

Short anwser...No, it literally doesn't. Long anwser, the amount of times Neptune references games and events from different continuities already debunks the notion that Neptunia has a canon. What Neptunia as a series runs on is different continuity and due to having a confirmed multiverse, this means all events in the series DID happen, but not in the same continuity. Regardless, that doesn't mean they didn't happen and it especially doesn't mean it doesn't scale back to the main cast of the  "main continuity". Regardless, this is another one I just didn't get at all per nature of what type of series Neptunia is

This one, surprisingly, has some basis to it...However, I disagree with that and for one reason. The main argument used for this is that the characters are implied to be giving their own descriptions for the items and as such, they are unreliable and likely exaggerated...However, here's the bigger issue, since when has the characters of Neptunia ever lied or overestimated themselves. I get that the series itself is somewhat a joke series, but that doesn't mean everything in it isn't meant to be taken seriously and even then...Let's play Devil's Advocate here, the item descriptions for characters such as Histoire or Blanc definitely shouldn't be lies considering the former literally IS UNABLE TO LIE and DOESN'T plus the latter has no history of exaggerating her power or lying about her strength. So in essence, the item descriptions for stuff such as Planet Crusher, shouldn't be ignored and Blanc would have no reason to lie about it's power and this ignores items such as Astral Blade, which isn't even being talked about from the perspective of a character and is 100% objective

CPUs Can Barely Destroy A City

Whenever someone claims this, you already know you've encontered a Neptunia downplayer. The reason this doesn't matter is because in fiction, characters often don't destroy on the level they can actually effect. It's explained better here, but for those too lazy, lemme explain. Let's use the real world for example, in our world, there exists something called The Gamma Ray Burst. This event has enough energy to basically vapourize the entire solar system, but it doesn't and you know why...It's power is localized and the same applies here to CPUs. Like every character in fiction 5-B and above, in stories, they don't destroy on that level because their 5-B or higher power on localized (I.E, someone who can destroy the solar system has 4-B power but localized into their punches) and two, there wouldn't be a story if they just outright the planet. So yeah, this is why The CPUs "can't destroy a city", it's basic logic, their power is localized and they don't have the range to do so. I should also address that The Dark CPUs weren't intending to destroy everything, but simply cause chaos and it's Kurome who had the desire to destroy all and she COULD do so

In conclusion, the verse of Hyperdimension Neptunia is pretty broken, more than people realize and hopefully this blog will give insight...I've put days into this and as such, I hope it comes in handy for those who want to get into the series but don't know much about it. That being said, Base CPUs should be 5-B, likely 4-B (scaling from items such as Planet Crusher and Astral Blade). In CPU form, they are 4-A (Sharing Fields have starry skies and even a single crystal can create one of these. CPUs are embedded with sharing energy and it's power, which allows for this) and at full power, they should be 2-A scaling from Histoire and Kurome