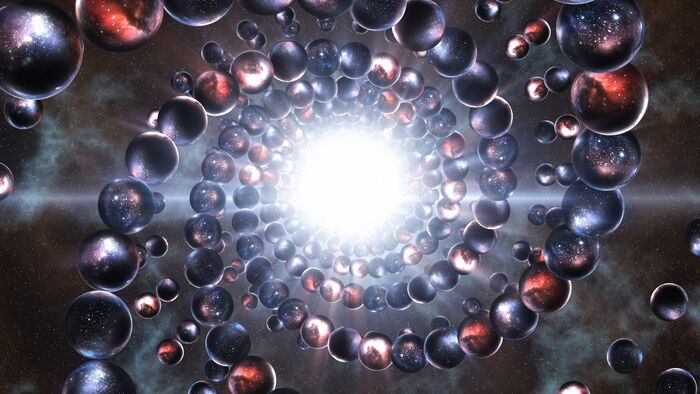 A Multiverse  is what experts call the hypothetical set of finite or infinite possible universes, counting the historical universe that people regularly experience. These finite or infinite possible universes compromise everything that exists and everything that can come into existence such as space, energy, time and matter. It also takes into account the constants and the physical laws that describe those mentioned previously. These universes contained within the multiverse are what people sometimes call “parallel universes". Our universe exists within the fabric of space-time — 3D space combined with time, to create a 4D continuum

A Hyperverse is term created for a verse that contains more than 11 Higher Dimensions. As defined, it's for multiverses that contain dimensions of a higher order than the standard 10 or 11 dimensions that most scientists have theorized to exist out of the total number of spatial dimensions. Entities who are 12th Dimensional are considered the bare minimum of what it takes to be considered a "Hyperversal" entity and the upper limits to Hyperversal extend to any finite number of dimensions

Note: The term that's used for this wiki is not found in any other notable work. More often than not, what we define as a "Hyperverse" would be usually described as a Universe or Multiverse within the retrospective work itself. As long as a cosmology has beyond 11 Dimensions, then it would qualify as a "Hyperverse" by our standard tiering system

Retrieved from "https://omniversal-battlefield.fandom.com/wiki/Multiverse?oldid=36948"
Community content is available under CC-BY-SA unless otherwise noted.