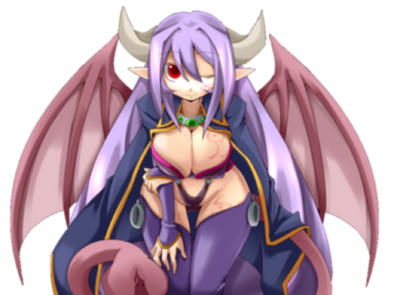 Alma Elma is one of the 4 heavenly knights and is technically the queen of the succubi, but she doesn't care about her race in the slightest. She was born with vast power, but her mom hated her for this and called her a failure. Despite this, Alma Elma is a very relaxed individual who rarely fights physically, but she's adept in hand-to-hand combat and martial arts. She is superior to Luka, just like the other heavenly knights, and sees him as 40% friend and 60% object. However, she still respects him for his fighting skill. She is highly mysterious and has yet to show the full extent of her abilities.

Classification: Succubus, The Queen of the Succubi

Special Abilities: Superhuman Physical Characteristics, Martial Artist (Alma Elma is portrayed as one of the best physical fighters in MGQ, having knowledge in martial arts), Flight (Through her wings, she can fly to even realms such as Heaven; albeit, only due to a seal allowing it to be accessed), Wind Manipulation (Imbued with the very essence of wind, as a result of making a pact with Sylph), Barrier Creation (Can create barriers comprised of pure wind, which will redirect attacks and other abilities, even when Alma Elma isn't defending. This extends to being able to block incorporeal things such as curses, mind-wiping abilities and other intangible forms of attack), Mind Manipulation (Has a variety of abilities that can put opponents in trances or even control them mentally. Far superior to weaker succubus who can make men go insane from merely gazing upon them), Life-Force Absorption (Her tail allows for absorption of both ber opponents and even their life essence), Teleportation (The Four Heavenly Knights can freely teleport to locations), Longevity (Monsters have longer lifespans than that of a human being, with Granberia's being at least thousands of years), Space-Time Manipulation (Scales above Queen Class Monsters, who have varies ways of altering space and time, such as manipulating the threads of time and space), Telepathy (Similar to other Heavenly Knights, Tamamo can read the minds of opponents and general thoughts), Non-Physical Interaction (Alma Elma and other monsters are capable of interacting with ghosts and spirits), Empathic Manipulation (Powerful succubus are capable of creating fields where pleasure is amplified to its maximum), Power Bestowal (Succubus are capable of bestowing their power to other creatures)

Speed: FTL (Can react to angel attacks, who all attack with the element of "Holy", which is just Illias's holy light and can intercept attacks from Illias, whose attacks are purely of light, of which is also supported by Illias being the embodiment of light as a whole)

Lifting Ability: Class Z (Should have comparable strength to Luka, whom of which needed Gnome to even contend with her)

Striking Ability: Planet Class, possibly Multi-Solar System Class (Deflected Ilias' physical attacks with her own. Overwhelmed and defeated Luka at the end of the game)

Stamina: Somewhat High (Didn't tire once until she traded blows with Ilias. Ended up being exhausted after only 10 minutes into combat)

Range: Extended melee range, Hundreds of kilometers with magic (Comparable to other types of magic capable of creating earthquakes)

Intelligence: High (Can see through every once of Luka's openings and flaws in their battles, regularly found and abused loopholes in Alipheese's rules to pursue her own desires.)

Weaknesses: She rarely fights seriously. Matter of fact, she hates to fight seriously due to her mother shaming her for her strength.

Community content is available under CC-BY-SA unless otherwise noted.
Advertisement